On a very pleasant sunny morning 23 people assembled in the Adur Recreation Ground car park at 09:15.
Friends of Shoreham Beach 9  https://www.fosbeach.com
World of Widewater 7 http://lancingwidewater.com
Shoreham District Ornithological Society  13
http://www.sdos.org
Many were members of more than one society with Marion Wood belonging to all three.
First we stood at my Wetland Bird Survey (WeBS) position near Norfolk Bridge to see 2 Grey Herons in the saltmarsh and distant Oystercatchers and other waders on the river shellbanks gradually uncovering prior to the 10:50 low tide.
At Flood Arch Lagoon a Kingfisher remained on the sluice for everyone to see in scopes.
Crossing to the west end of the RSPB Adur Nature Reserve we all had scope views of distant birds in the houseboat channel and bank. About a dozen Dunlin beavered around with a few Redshank and also Teal. Moving on along the houseboat path we were intercepted by Jess Aidley who invited us all to view the reserve from houseboat ‘Myrtle’. Thank you Jess with a particular thanks from many of us who saw the Kingfisher fly through the channel by your home. (Much envy I am sure!) 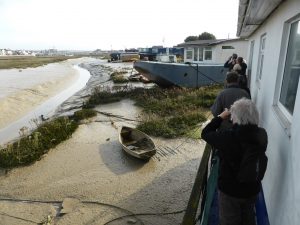 It was here that the leader realised two distant Cormorants in the saltmarsh, ‘identified’ earlier, were wooden posts!! Never mind – but this did level the skill levels!
We moved on and encountered work being done on the land side path bank in preparation for the new Tidal Walls. Vegetation had been cleared and was being raked today in a process intended to capture and remove lizards etc. or encourage them to move to safety at the foot of the bank.
Crossing the Ferry Bridge we arrived at Coronation Green. A dozen disturbed Oystercatchers treated us to a fly-pass before returning. A small group of Redshank and a few Teal were opposite and, just as I thought we were to be unlucky, the Greenshank was found and paraded too & fro giving all a good scope view. We noted the Grey Herons were sedentary within the saltmarsh.
We finished our tour at Ropetackle where Helen spotted a group of over twenty Turnstones, distant and difficult to see against the pebbles and shells until they moved. Disappointingly no Ringed Plovers were found. Noisy railway viaduct work and workers on the ground were near where I sometimes find them at Ropetackle. Also Ropetackle at low tide often produces a Kingfisher perched on a moored boat hunting fish trapped in pools, but not today.
All agreed this was a pleasant and informative morning. I had been able to explain when Snipe could be seen in RSPB and mention the recent Spoonbill sighting.
A show of hands indicated that nearly half those present were not aware of the RSPB presence! RSPB please note – signage and information panels desperately needed. SDOS would like to help compose panel info..
Tim Holter: